Give it a Lift: Uplift Modeling

Uplift modeling has applications in customer relationship management for up-sell, cross-sell and retention modeling. It has also been applied to personalized medicine. Unlike the related Differential Prediction concept in psychology, Uplift modeling assumes an active agent.

Uplift modeling uses a randomized scientific control to not only measure the effectiveness of a marketing action but also to build a predictive model that predicts the incremental response to the marketing action. It is a data mining technique that has been applied predominantly in the financial services, telecommunications and retail direct marketing industries to up-sell, cross-sell, churn and retention activities.

The uplift problem can be stated as follow, given the following:

So that the total return

is maximized, subject to the constraints that the number of cases assigned to treatment j is not to exceed.

Solution to the maximization problem, can be reached with a sum does not involve f, so maximizing total return is equivalent to maximizing the first term:

As for to the solution to the problem when we consider only the responses to treatment 1, to attain the maximum return: 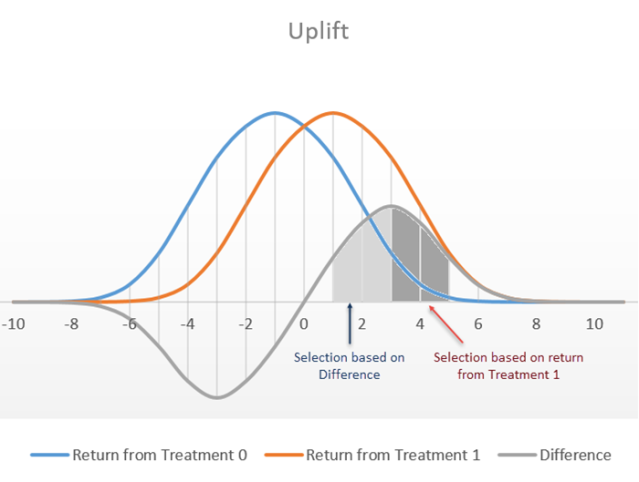 If we consider only the response to treatment 1, and base targeting on a model built out of responses to previous marketing actions, we are not proceeding as if to maximize ∑ Rif(i) for i=1…N. Such maximization would not yield the maximum return. We need to consider the return from cases subjected to no marketing action.

The incremental response lift, with all initial vales set to 0, can be obtained using the following pseudo code:

The associated probabilities and netlift pseudo code is:

The table below shows the details of a campaign showing the number of responses and calculated response rate for a hypothetical marketing campaign. This campaign would be defined as having a response rate uplift of 5%. It has created 50,000 incremental responses (100,000 – 50,000).

Traditional response modeling typically takes a group of treated customers and attempts to build a predictive model that separates the likely responders from the non-responders through the use of one of a number of predictive modeling techniques. Typically this would use decision trees or regression analysis.

This model would only use the treated customers to build the model.

In contrast uplift modeling uses both the treated and control customers to build a predictive model that focuses on the incremental response. To understand this type of model it is proposed that there is a fundamental segmentation that separates customers into the following groups (Lo, 2002):

The only segment that provides true incremental responses is the Persuadables.

Uplift modeling provides a scoring technique that can separate customers into the groups described above. Traditional response modeling often targets the Sure Things being unable to distinguish them from the Persuadables.

Majority of direct marketing campaigns are based on purchase propensity models, selecting customer email, paper mail or other marketing contact lists based on customers’ probability to make a purchase. Simulation-Educators.com offers training courses in modeling and simulation topics. The following is an example of a of standard purchase propensity model output for a mailing campaign for such courses.

This purchase propensity model had a ‘nice’ lift (rank’s response rate over total response rate) for the top 4 ranks on the validation data set. Consequently, we would contact customers included in top 4 ranks. After the catalog campaign had been completed, we conducted post analysis of mailing list performance vs. control group. The control group consisted of customers who were not contacted, grouped by the same purchase probability scoring ranks.

We should be predicting incremental impact – additional purchases generated by a campaign, not purchases that would be made without the contact. Our marketing mailing can be substantially more cost efficient if we don’t mail customers who are going to buy anyway.

Since customers very rarely use promo codes from catalogs or click on web display ads, it is difficult to identify undecided, swing customer based on the promotion codes or web display click-throughs.

Net lift models predict which customer segments are likely to make a purchase ONLY if prompted by a marketing undertaking.

In order to classify our customers into these groups we need mailing group and control group purchases results from similar prior campaigns. If there are no comparable historic undertakings, we have to create a small scale trial before the main rollout.

Standard purchase propensity models are only capable of predicting all purchasers (combined segments A and B). The probability decomposition model predicts purchasers segments that need to be contacted (segment A) by leveraging two logistic regression models, as shown in the formula below (Zhong, 2009).

Because uplift modeling focuses on incremental responses only, it provides very strong return on investment cases when applied to traditional demand generation and retention activities. For example, by only targeting the persuadable customers in an outbound marketing campaign, the contact costs and hence the return per unit spend can be dramatically improved (Radcliffe & Surry, 2011).

The first appearance of true response modeling appears to be in the work of Radcliffe and Surry (Radcliffe & Surry, 1999).

Uplift modeling is a special case of the older psychology concept of Differential Prediction. In contrast to differential prediction, uplift modeling assumes an active agent, and uses the uplift measure as an optimization metric.

Jeffrey Strickland, Ph.D., is the Author of Predictive Analytics Using R and a Senior Analytics Scientist with Clarity Solution Group. He has performed predictive modeling, simulation and analysis for the Department of Defense, NASA, the Missile Defense Agency, and the Financial and Insurance Industries for over 20 years. Jeff is a Certified Modeling and Simulation professional (CMSP) and an Associate Systems Engineering Professional (ASEP). He has published nearly 200 blogs on LinkedIn, is also a frequently invited guest speaker and the author of 20 books including: